Anne Sheehan is Director of Vodafone Business UK, having joined the company in December 2017. Prior to this, Anne led the enterprise business in Vodafone Ireland for four years. When Anne started her role at Vodafone Ireland in 2013 she brought with her more than 16 years’ experience in the ICT industry, including a number of years at IBM where she held a variety of senior positions, including Vice President of Sales for the Nordic Region, Sales Director for IBM Ireland, Head of Channel, Head of Services and Territory Leader. As Business Director at Vodafone UK Anne has responsibility for Vodafone Business, which includes overseeing Vodafone's fixed, mobile, unified communications, cloud and Internet of Things (IoT) services and support.
During her time at Vodafone Ireland, Anne was integral to Vodafone receiving Cisco Gold and Avaya Platinum accreditation to provide Unified Communications solutions to enterprise, propelled the company’s journey into Cloud and Hosting with the opening of Vodafone Ireland’s first Data Centre in Clonshaugh and, in partnership with EMC, developed the first IIC-approved Internet of Things (IoT) test bed in Europe. Anne holds a Bachelor’s degree in Business Studies, specialising in Accounting and Finance, and a Graduate Diploma in Computing, both from the University of Limerick.

"Anne puts the customer at the center and brings a lot of energy and passion into delivering great customer experience." 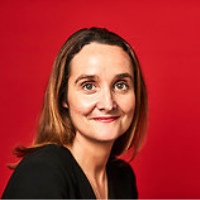